The Red-Crowned Parakeet, commonly known by its Maori name Kākāriki, is a long tailed bright green parrot with a red crown, forehead and band of red which extends from the bill through the eye and a violet blue colour on the tips of its wings. Kākāriki are now very rare in the North Island. 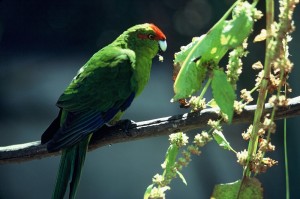 They are even rarer on the South Island, but are still widespread on Stewart Island and many predator-free island reserves, including Tiritiri Matangi. During the 1800s kākāriki were common and at times flocks would emerge from forests to feed on grain and fruit crops. Farmers and orchardists considered them pests and shot thousands of the birds in an attempt to protect their harvests.

The introduction of feral cats, stoats, ferrets and ship rats to New Zealand also resulted in the reduction of their numbers. They often feed on the ground rather than in the canopy of the trees which makes them susceptible to these mammalian predators. They live in permanent pairs that frequently join with other pairs and their young and in the autumn and winter they form small flocks. They are non-migratory although they are capable of flying long distances when searching for food or fresh water.

Kākāriki eat a wide variety of plant seeds (particularly flax), fruit, berries, buds, shoots and flowers, as well as nectar and small insects. They prefer to inhabit relatively open spaces in and around forest areas and have a rapid, direct flight, usually above the canopy and often accompanied by a rapid loud chatter: “ki-ki-ki-ki-ki”.

Kākāriki make their nests in holes in branches and trunks, ground burrows or densely matted vegetation. Female kākāriki and chicks are vulnerable while they are in the nest since there is no escape route from predators that enter the tree hollows. Nesting generally occurs from October through to December. The female incubates 5–9 eggs for around 20 days until they hatch. Both birds assist with the feeding of the young. During incubation, the male calls the female off the nest and feeds her by regurgitation. Both parents feed the chicks but the male usually transfers the food to the female, who then passes it along to the chicks.

Any individual, community group or organisation interested and committed to protecting and restoring biodiversity can be a member of the Forum. It is free to join. You will get an invite to Forum events and receive information on biodiversity workshops, useful biodiversity information, access to other members for sharing knowledge and ideas and help with restoration projects. So contact us and become a member for no cost.

Dive straight into the feedback!Login below and you can start commenting using your own user instantly